Raised in Hellertown, PA, Glenn’s proclivity for Horror Films (particularly those of the Universal and Hammer Studios variety) and Sci-fi/Fantasy imbued him with a ravenous appetite for all things genre-related. This passion compelled him to work on various theatre projects as both actor and fledgling make-up artist throughout Junior and Senior High School. As an undergrad at York College of Pa., he landed his first acting role in an independent feature … which happened to be a horror film. He moved quickly to secure the Special Effects Make-up Artist position as well, and began creating the multitudinous gags on his first films with a shoestring budget.

After Graduating with a BA in Speech Communications, he was working on an array of indie projects and collaborating with world renowned musical acts such as Type-O-Negative and horror punk icons the Misfits. That same year saw him make the move from the East Coast to Los Angeles in order to facilitate the progression of his acting, writing and make-up effects career. Upon arriving in Hollywood he found his first foothold at Optic Nerve as a lab technician, fabricator, painter and eventually sculptor and designer – working tirelessly for years on several seasons of Buffy, Angel, and X-files among others.

The path of his career led him to opportunities at other studios as well, working on Pitch Black: Chronicles of Riddick and Bioshock. He continued auditioning and performing, landing multiple guest star roles as a character actor in The Shield, Committed, Charmed, Scrubs, and Heroes as well as various other projects including the first Pirates of The Caribbean film.

He then returned to the very first shop he had worked at, Optic Nerve — this time as CEO. Reinventing both the business and artistic perspectives of the Studio from the ground up, his new competitive studio model was built for the modern marketplace. Its focus was now honed on cross training core crew so that they could behave as a modular problem-solving machine, moving comfortably from one department to another and adapting easily to the constant flux of multiple production schedules. After more than a decade of amazing shows Hetrick evolved the shop even further into the newly renamed Alchemy Studios! Expanded services include 3D Conceptual Design and cutting-edge 3D Printing Techniques as well as seamless integration with CGI Visual Effects.

As the CEO, he personally supervises every effect for his studio’s many projects including hundreds of forensically accurate make-ups and corpses for Crossing Jordan, Hugh Jackman’s body replicas for The Prestige, all of the make-up illusions and prosthetics that propelled Heroes and CSI:NY, and the surreal effects in Sony’s Legion. He constantly continues working as both FX Artist and performer. His resume includes special effects for The Event, custom wardrobe and instruments for Lady Gaga, prosthetic effects and props for Disney’s Journey 2: Mysterious Island, Lionsgate’s Hunger Games 1, 2, 3 and 4, The Dictator, The Host, Mad Men, Marvel’s Agents of SH.I.E.L.D., Steven Spielberg’s Extant , Marvel’s Inhumans and Runaways and most recently, Star Trek Discovery. Marrying his passions for performance and FX, he stars in all 13 Seasons of the on-going Syfy Hit show Face-Off!, as well as Episodes of Best ink, Steampunk’d, and Gameface. In 2018 Glenn was nominated for the Emmy award on Star Trek Discovery. In 2019 Hetrick won the Emmy award for Outstanding Prosthetic Makeup For A Series on Star Trek Discovery. 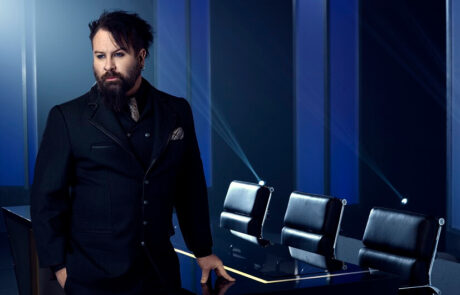 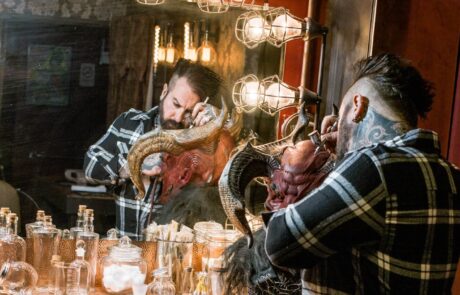